On the Sunday after Christmas Men’s Wearhouse sent an email blast to its customers announcing the last day of of its After-Christmas Deals promotion. But due to an unfortunate glitch in its email system, customers received the same email dozens of times. I counted 64 in my inbox. I was slightly annoyed.

But I’m also in marketing and I understand that automated systems can sometimes go sideways. It sucks, but it happens. As the old saying goes, the true test isn’t whether you make a mistake – it’s how you respond to the mistake that really defines you. I fired off a tweet:

64 emails in my inbox from @menswearhouse in 1 day – really? Should I unsubscribe?

I was curious to see what their response, if any, would be. We’ve all seen examples of companies mishandling screw-ups, either becoming defensive, not responding at all, or worse – attacking the complainer. I wanted to see how savvy Men’s Wearhouse is with social media. Their response would determine whether I unsubscribed from their emails or not.

Now, I’m hardly one of their bigger customers. I do like their products but with two family members’ college tuition to pay, I don’t exactly have a lot of discretionary income left for frivolous things like clothing. If I never spent another dollar in their stores they’d never miss it. It would have been easy for them to ignore me. But to their credit, my answer came 3 and a half hours later:

@ChipStudebaker Sorry for the inconvenience the mishap w/ our email system caused. Our team is working to prevent this from happening again.

Short, to the point, and effective: an apology, a brief statement about the cause of the problem, and assurance that action was being taken. No excuses, no phony falling on their sword – just a swift, positive response. That’s all I needed. I didn’t unsubscribe.

My response let Men’s Wearhouse know I was rooting for them to resolve their issue:

@menswearhouse thanks for the reply. Best of luck!

I think they were relieved to see I wasn’t going to be a troll – they even favorited my tweet. You can almost hear the relief in their final tweet to me:

@ChipStudebaker We appreciate your understanding, Chip. Hope you enjoy your NYE. Wishing you a happy & healthy New Year!

What Men’s Wearhouse understands is that social media for business is no different from face-to-face engagement – except that the whole world can eavesdrop. They knew they weren’t replying just to me, they were telling everybody in the Twitterverse that they appreciate customer feedback and they are responsive to us. Well done.

Now it’s your turn. Do you have an example of customer engagement in social media, good or bad, to share? What was your experience?

The email looked legitimate and fishy at the same time. It had what appeared to be the URL of a legitimate chapter of the Better Business Bureau and was mostly well-written.  Yet it did have a single sentence with a grammatical error that should have raised a bigger red flag than it did. No genuine email would say, “Your emails is…”  At least I hope not; the grammar nazi in me would have a fit. 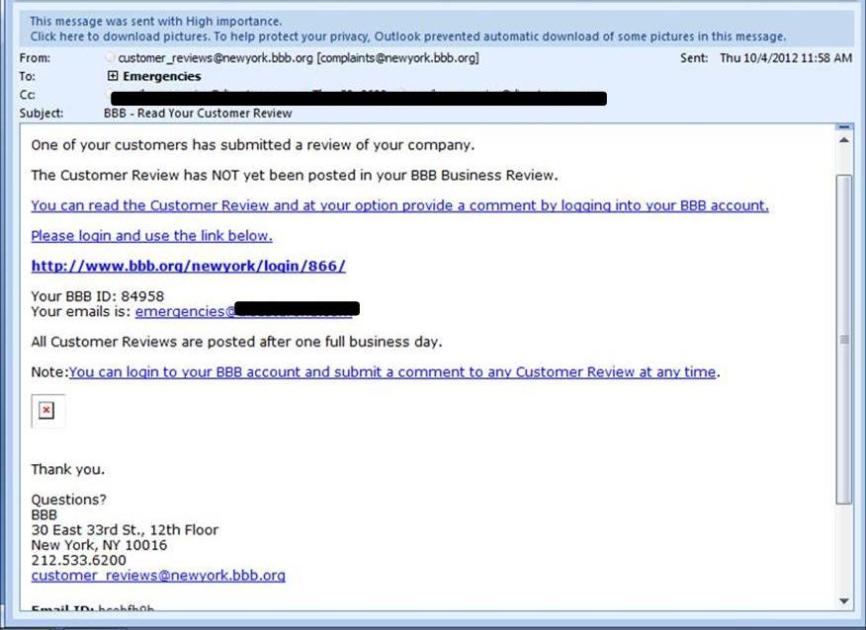 Against my better judgment I clicked on the link anyway.  END_OF_DOCUMENT_TOKEN_TO_BE_REPLACED