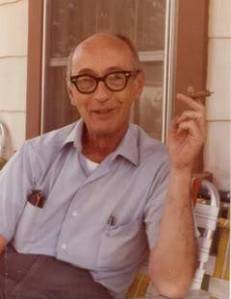 It’s been almost 32 years since we lost him. Even though I’ve been alive without my dad longer than I was alive with him, his influence is with me every day and he’s practically larger than life in my memory. He was a wise and learned man and we enjoyed deep conversations together. I always knew I was loved and my dad knew I loved him. I will always miss him.

He was a U.S. Army veteran, high school English teacher, community college English professor, community college dean, and then a truck driver. It’s a long story – never let anyone tell you there isn’t corruption and politics in the community college system. My dad was royally screwed by a dirty college president who chose not to renew a good man’s contract so he could give a job to a friend.

The ensuing scandal opened a can of worms that eventually led to the board asking for the president’s resignation. My dad’s good name was restored but his job wasn’t. To my amazement, he forgave the S.O.B. in his heart before he passed. I know we’re commanded to forgive our enemies but I found it hard to be as charitable.

He started driving a truck after his career in education ended. This was in the mid-1970s, coincidentally just when the romanticizing of 18-wheelers and their drivers was taking off. He would often be away from home for weeks at a time. He missed his family but he did what he had to do to support us.

He drove for six years until he became too sick to drive any more. I never heard him complain during the six months he battled lung cancer. He was hospitalized during the final two weeks of his life, yet he didn’t ask for any additional pain medication until about two days before his death. He was a MAN.

To this day when I see trucks on the highway I remember that the driver is probably somebody’s dad, and I pray he’s doing OK. To those of you in academia, and those of you on the road, I wish you Godspeed.

It does my spirit good to honor his memory in writing. I never smoked a cigar with him, and I’d give anything for the opportunity now.